Clay Taber was just 23, and a new college graduate, when he learned that his kidneys were 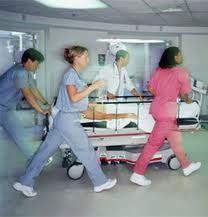 shutting down.  “I was in the grocery store when my phone rang,” said Clay’s mother, Sandra Taber, in a press release.  “It was the doctor’s office, and they told me new tests showed that Clay was in complete kidney failure. He needed to get to a hospital immediately. Needless to say, it was one of those phone calls no parent ever wants to receive about their child.”

Clay was admitted to Emory University Hospital in Atlanta, and that’s where he met someone who would literally change his life. Allison Batson is a transplant nurse at the hospital, and the two formed a bond. “Immediately, when Clay came onto our unit, he became a special patient that everyone just gravitated to,” Batson, 48, said in a press release. “Here was this young man with everything in his life ahead of him, and he was fighting for his life.” 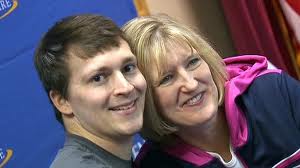 What Allison did next was definitly beyond her normal job description. Batson was tested to see if she could be a match for a kidney transplant, and she tested positive. “I thought, you know what, ‘I can do this.’  I talked to my family about it, and all of them were incredibly supportive.”

“Both Taber and Batson’s procedures went as planned.  Today, Taber is preparing for his wedding in June, and he hopes in the future to pursue a banking career or work in the athletic department of his alma mater.  He calls Batson his ‘third mom’ alongside his own mother and the mother of his fiancé. ”

This entry was posted in Making a Difference, News of Courage and tagged bravery, compassion, courage, help, life. Bookmark the permalink.